You’ll notice that the layout and photos might be different from previous posts, that’s because I am trying the mobile app and using my iPhone for pix, since my camera would take to long to load on the computer. I am, after all, going to KC and need time to pack and travel!

Ball #1:
Carl Pavano finished his ‘rehab’ drill, Coach Anderson picked up a couple of balls and tossed one to me. 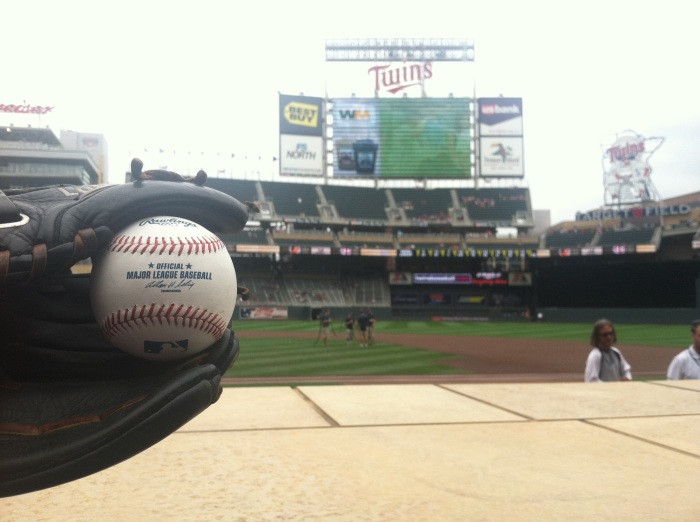 Ball #2:
Jamey Carroll always warms up in front of the dugout after the national anthem and always tosses the ball to someone when he’s done. No one in my area knew this, and so when he was done I just yelled “Hey Jamey!” and flashed my glove. Just like that I had two to my name for the day. It’s fitting that his warm-up partner was Trevor Plouffe, you’ll see why next…

Ball #3:
After the game I saw Trevor Plouffe in the dugout and he looked my way. I gave him a shoulder-shrug to say, “Hey, get them next time!” I had told him about my trip to KC and also talk to him before some of the games, so he knows of me by now. He gave me the one-finger sign meaning “Hold on one minute”, then disappeared into the dugout. I snuck from the 2nd row to the 1st row and when he popped out he threw a pair of his batting gloves to me!! They were even still sweaty!! This was awesome, now I had some gloves to go with his bat. I thought that was it, and so I started towards the exit only to look back and notice that he was back again from the dugout and looking for me again!! He tossed me my final ball of the day, #42 overall. For those of you who are nerds like me, The Hitchhiker’s Guide to the Galaxy says that 42 is the meaning of life. Pretty cool!!

So here it is, the big haul from the game before my Kansas City Bigfoot adventures… (Balls from left to right, 1-3)

My HUGE THANK YOU goes out to Mr. Trevor Plouffe! I know I’ve said this before, but he treats his fans so wonderfully! Thank you for everything and keep up the hard work!! Thanks also to Jamey Carroll and Rick Anderson. Thanks to everyone else that supports my Bigfoot adventure, I hope it brings my smiles!!!