While many ballhawks (and baseball fans in general) are more inclined to love statistics, I also understand that I may lose 99% of my audience before the end of this entry.  Why?  Stats-overload.  Unless your name is Mateo Fischer, I cannot confirm that you actually love stats as much as I do (Mateo wins in a stat-off, by the way), but the following is a good test.

Immediately following the Twins’ regular season finale, I posted a photo version of my “Year End Review,” but today it is…

With 144 people logging one or more baseballs on this community site, here are how my numbers stack up against the group.

High (Balls In One Game):

As you can see, I made do with my lack of attendance and greatly improved upon my 2012 season in every category (just filter by the year on the MGB link above).  To be at or near the top ten in so many categories, while only being 45th in games attended is bittersweet.  On one hand it shows that I can put up decent totals, but on the other is just points out how few the number of games I attend affect my overall total.

I also realize that everyone’s categorization of what constitutes a “game ball” is different, but like I have explained before, if the Twins could sell it as a game used baseball, then I can count it as a game ball – toss-ups are more than justifiable in my book.  Sure, a gamer on the fly is much more exhilarating, but it is not the end-all be-all of gamers.

Twins analysis of Runs Scored (Based on Situational Breakdown):

Number of Balls By Time of Year:

Number of Balls By Month:

Number of Balls By Time of Game:

Number of Balls By Method of Retrieval:

Number of Balls By Team:

Number of Balls In One Day By Number of Occurrences:

Number of Balls By Player:

This is the last breakdown, I swear!  If you are still reading at this point, contact me and claim your prize.  Some of these first will be kind of cool, while others will be incredibly trivial, but as a baseball fan aren’t we used to the trivial facts popping up on our screen?

The moment we’ve all been waiting for (or is it just me at this point?)…  How much did I “grow” compared to last year?  The following chart will break it down, line by line. 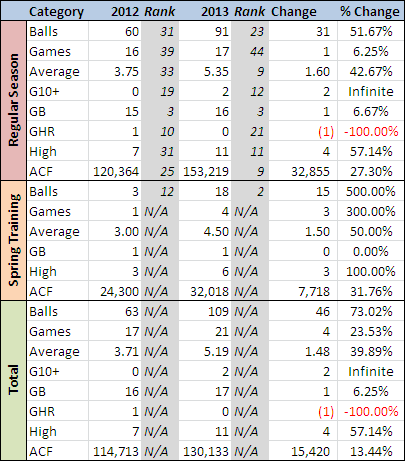 This post is ending, but the year in review posts are not.  I still want to give a breakdown of my donations to NAMI.org, give my annual Thanksgiving Thanks, post collages of both baseball and non-baseball things, give my top ten albums of 2013, and give a year-end recap of the blog stats for 2013.  So while this is the end of the “Ball Stats” portion, it is hardly the end of the line for this blog in 2013.

Is there something I missed?  Do you want to see more stats (I kid), or do you have an idea for my blog (blog post idea, layout, etc.)?  Contact me – via comment, Twitter, email, or in person – I’d love to hear from you!