Hopefully the name in the title sounds familiar to you; if not, be prepared to know the man, the myth, the legend… Greg Barasch!

Greg was in town with his father in order to cross off Target Field from their list of stadiums to visit.  They mentioned that Target Field would be the 28th out of the 30 current stadiums – they had been to Minneapolis’ finest stadium, the Hubert H. Humphrey Metrodome, but that has been deceased since last year (and out of baseball service for over 5 years).

But if you want to learn more about “The Guest Formerly Known As Greg” (his official Minnesota name), listen to episode two of “At the Gates.” 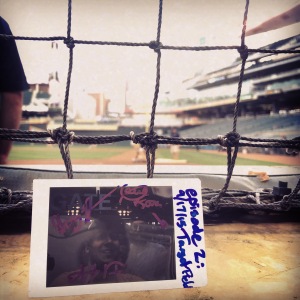 Speaking of “At the Gates,” they were wet.  They were very, very wet.  Rain came in earlier in the day and never fully went away.  The weather was nothing short of humid and after each line of storms/rain came through, another line formed in its wake.  I thought things were looking good around 3 or 4, but then the last line formed and guaranteed NO BATTING PRACTICE!

No BP for a ballhawk is like spoiling a movie or an episode for a nerd – and yes, ballhawks are the nerds of baseball (for the most part), and I fully accept that.  While not good news for Paul and myself, this was even worse for Greg (at least on paper).  To travel to a new stadium, riding an average close to 15 balls/game, and to only have a shot at snagging warm-up balls and game balls, this severely limits the number possible.  The good news?  It was a Thursday and there were no bobbleheads to be given away (something I could not say about my trip to Houston in two days).

If you can do simple math, then you will know that I got SIX balls this game (and a special surprise to be shown below).  Paul ended up with FOUR.  And Greg?…  He just had to show off and put up more balls than Paul and I combined… ELEVEN! 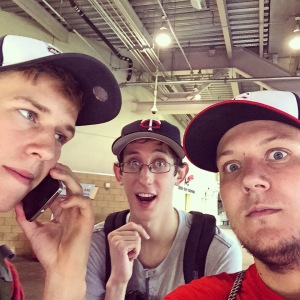 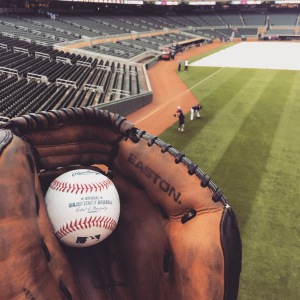 Once inside the stadium, we were at least given a slight hope of getting on the board – the pitchers were warming up.

I believe that all three of us got one within the first few minutes.  This ball in particular was from Glen Perkins.

Another warm-up ball, this time from Trevor May.

Straight from the ball bag, courtesy of Eduardo Escobar.

What appears to be a game used ball, but given to me from the ball bucket (not bag) from Dominique.  Dom uses the bucket to hold balls that he doesn’t give to the authenticator or toss up into the stands.  It was probably a hold out from a previous game, but there is no way I will ever know. 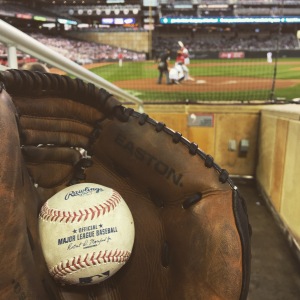 A 3-2 pitch to Albert Pujols via Tommy Milone in the top of the first.  Yep, a ball swung at by a future hall of famer. 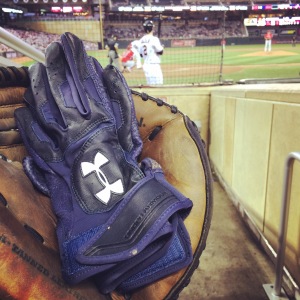 Thank you, Trevor Plouffe!  I love snagging not-baseballs, too.  The collection will look AMAZING someday, when I can properly display it all. 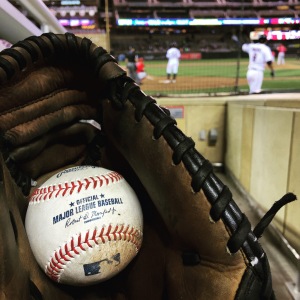 The last of the night, another gamer tossed by Dom. 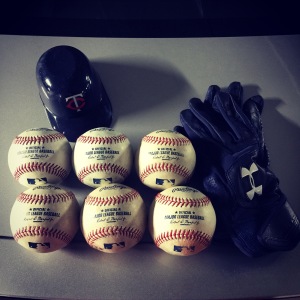