Instead of focusing on what wasn’t – a trip that would have included Cincinnati and Cleveland – I’ll try focusing on the game at hand.

As the title should suggest, the weather was terrible, at least for “August in Minnesota” standards. Game time temps were around 55 degrees and it was also windy – it probably felt like it was in the upper 40s. Even though we have a reputation for cold weather, this type of lack of heat is not normal. The day before was in the 80s and today will be upper 70s. Oh, and there was rain pretty much all day. But since the radar was showing that the worst was leaving town and it looked dry (though still cold and nasty) from mid-afternoon on, I figured I’d go ahead with attending this game. Friday nights have fireworks and the weekend is just generally not great for snagging balls, so this was my only shot at seeing the newest member of the 3000 hit club.

When the gates finally opened the handful of us season ticket holders dumb enough to show up early to the game were greeted by a bright white blanket over the infield. It’s a tarp!

The entire early entry was spent watching NOTHING happen – no players tossing balls, no easter eggs to be found (first game of the homestand with crappy weather all day will do that), and no access to anything other than the outfield. I then tried my best to get a warm-up ball from the Rangers pitching staff, but by then the kids were in full force and I had no shot.

I was shut out. It was going to take a super late Twins warm up (which didn’t happen) or a gamer to finally get on the board. And of course, it was Eduardo Escobar who continued this ritual that we somehow share. He is running away with the most balls tossed to me by a player and if he keeps it up there is no way anyone will catch him (and he may double up everyone else int he process).

Then during the game a got a few from the dugout area. The fifth of the day was a pitch in the dirt to Adrian Beltre in the top of the 9th, so that’s pretty sweet. But even though I still put up a decent total, the terrible weather and generally boring play made the game go by so slowly. I’m getting sick of games without batting practice, hopefully things change… and quickly.

Maybe this should be included, but I doubt there is much interest. Who cares, I’m going to tell you anyway. After the game was finally completed (and I had shivered enough in my shorts and t-shirt), I was just about to call it a night when I walk by the dugout one last time. What is tossed up to me at that moment? A pair of Joe Mauer batting gloves. OK, even though the weather was bad, I guess it pays to go to games. You never know what you might be able to bring home/experience. 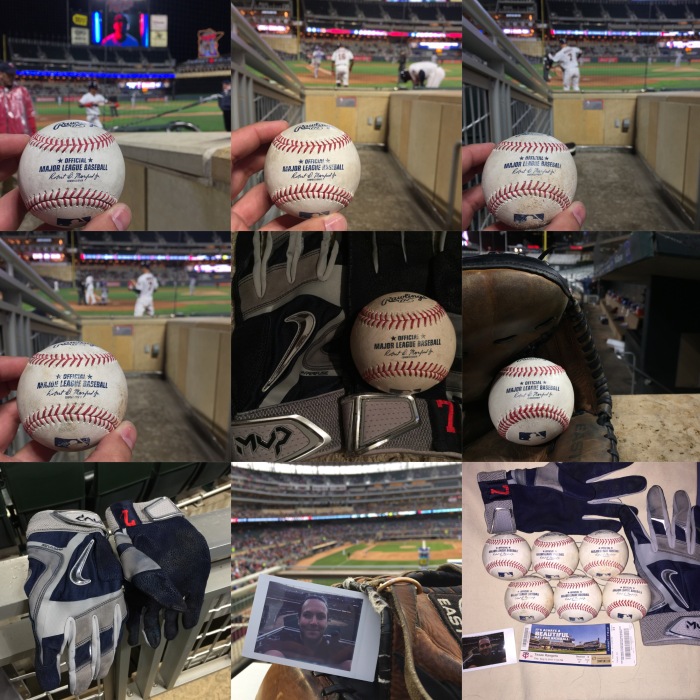 Podcast from the gates of this game…

As you may have been able to tell, I am running low on storage space via WordPress. I have resorted to posting one collage per post, but I miss having extra pix, especially showcasing some panos from new stadiums. If you have a good work around or would like to see them posted somewhere else, let me know. If interest is high enough, I could be swayed to additional platforms.