I could either look at this in the negative or choose to focus on the overwhelmingly positive. Why negative? Because it was announced that the Twins would be using a special commemorative for Joe Mauer on this day. They didn’t announce that until just a few days before the game. Since I already had the Omaha/Cincy trip planned and PERFECT seats to try to get these Cincy commems, I marched forward with my original plans. Then the weather came… canceling BP and making a game look unlikely, while the predicted storm system in Minneapolis never transpired.

BUT… POSITIVITY! (Something I urge us ballhawks and ANYONE ELSE reading this to focus on. We can’t control everything and sometimes we just gotta roll with the things greater than us; hopefully bringing a positive light to someone else’s experience on this planet.)

The positive side was immediate. I took the tour that was part of my luxury ticket package and I was not disappointed. If you remember my post from the last time I was in Cincy, you will know that I found a ball on that tour. And today was no different, I found a perfect commemorative 150th anniversary ball under the wooden bench that the coaches sit on in the dugout.

Sure, it rained and BP was eliminated, but I still put up a more than respectable 7 balls. I got both varieties of commemoratives and was able to hang out with Greg and Benny for a long weekend. Not a bad trade off. It’s better to take the sure things and spend time with friends/family, than chasing after something riskier and not guaranteed, at least in this instance. 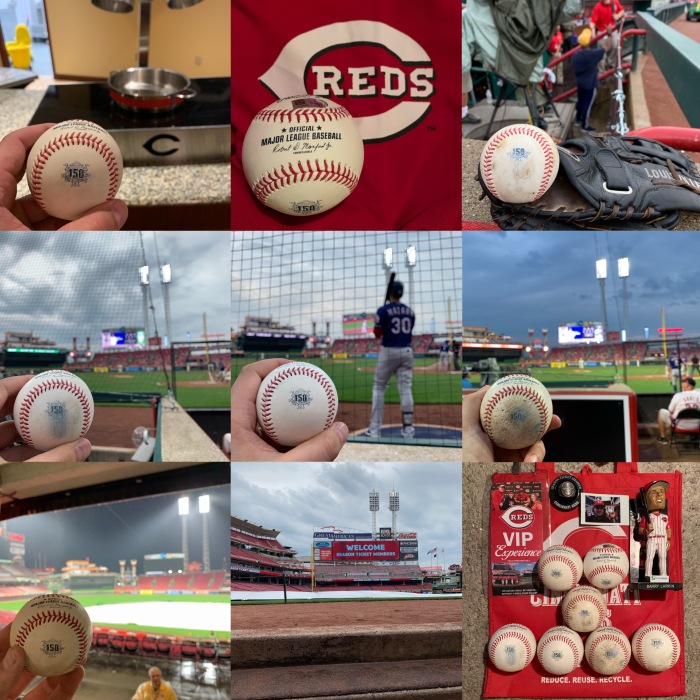 Ball 2: Tour Guide (signed by Eugenio Suarez AND authenticated. WHAT?!)

And here is the song that is referenced in the title. This one goes out to Greg. MERCY!